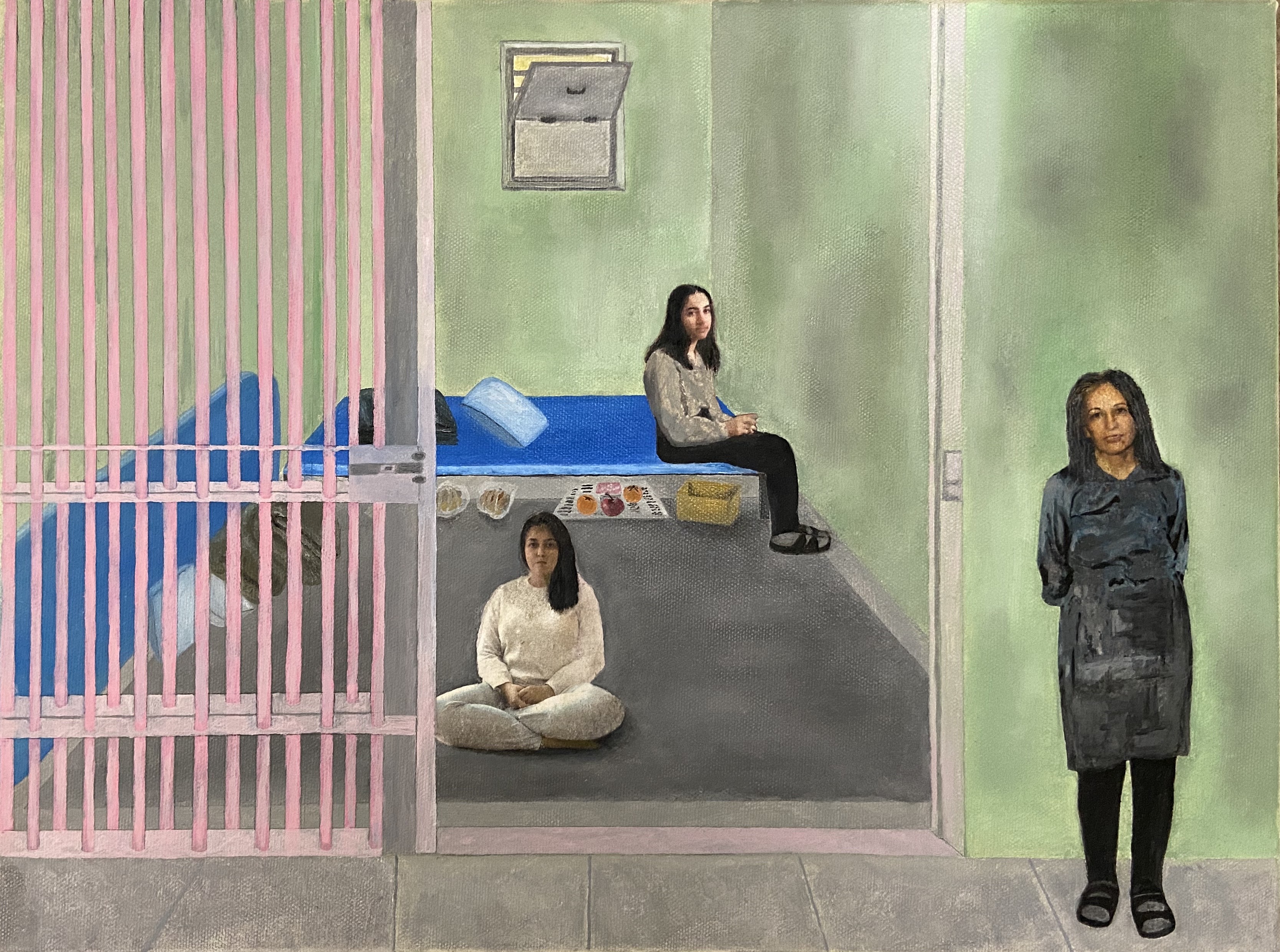 Artist Statement:
My paintings narrate the contemporary situation of the systematically persecuted Iranian Baha’i community – Iran’s largest religious minority – after the 1979 Iranian revolution. I take inspiration from interviewing, hearing, feeling, reading, and researching the stories of the Bahai’s of Iran. Many of my paintings depict the stories of the persecution of my immediate and extended family. I primarily work with oil on canvas and when necessary, I use mixed media to maintain historical accuracy. I work on small canvases and the details are often miniature in scale. Each of my paintings are thoroughly researched, are inspired by actual events, and show the beautiful aspects of those who have been persecuted by highlighting their steadfastness, powerful spirit, and love for humanity.

My paintings tell the stories of this systematic persecution— including execution or murder, arrest, detainment, and interrogation. Tens of thousands more have been deprived of jobs, pensions and educational opportunities – including a systematic denial of access to higher education. The Bahá’í community’s holy places, cemeteries, and properties have been confiscated, vandalized, or destroyed, and many Bahá’ís have had their homes and other property seized or damaged etc. Throughout my work, I am constantly reflecting on the concept of a humanity free from religious prejudice including how we can eliminate all prejudice such as racism, sexism, nationalism, and how our prejudices can make complicated or difficult the development of our community and not allow each other to grow. I often use my own body and those of my friends and family in my paintings.

Bio:
Maryam Safajoo is a painter born and raised in Iran but currently is living and working in Illinois, USA where she has her citizenship. Maryam herself experienced this oppression herself in Iran. She remembers the day in the early morning when government security forces burst into her home and ransacked it. Her younger sister was crying on her way to school. Later her sister was denied access to university and because of her activities to understand why, was placed in solitary confinement. Her paintings narrate these stories which are a result of her conversations with the people who were in close proximity of these actual events. Many of the events Maryam depicts only exist in the memory of those who experienced them and have no pictorial existence. In many cases if visual records did exist, they have been confiscated by the Iranian authorities in raids of homes. Maryam’s depictions are often the first time these events have taken visual form. She records the details of this history. For example, the shoes, clothes, artifacts, and environments seen in her paintings are very close to those that were there in the event. Her paintings are unique as they are based on qualitative research with those who are familiar with the situation she depicts; they are a combination of research and art.
Maryam was not able to study her BFA in Iran because of the danger of being kicked out of the public university she was surprisingly allowed to enter. She chose business administration, a program that also existed at the BIHE (the University that the Bahá’í Professors who were kicked out of the University made) so if she were kicked out, she could continue her studies at the BIHE. When she moved to the United States, she applied for an MFA program and was accepted by the School of the Museum of Fine Arts at Tufts University, MA. She works on heavy subjects in each painting. Her work is very sensitive and has an important message that needs to be shared with the world. Maryam has exhibited her work at venues including Harvard University, the Massachusetts State House and presented at the Museum of Fine Arts in Boston. Her work has recently been featured by IranWire, PersianBMS, Radio Farda and Aasoo.